On May 24, 2022, Mayor Randy White issued a proclamation declaring the
City of Derby as a Purple Heart City in 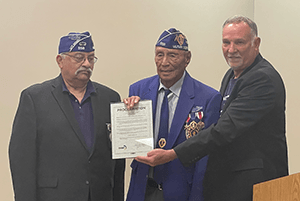 recognition of the City's support of military personnel, veterans and families, and especially those who are recipients of the Purple Heart.

The Purple Heart medal is presented to U.S. military service members who have been wounded or killed by enemy fire. It was originally awarded by George Washington in 1782 to recognize meritorious service in combat. It is the nation's oldest and one of the most distinguished military awards.

The Derby community is home to many veterans and families, including Purple Heart recipients and Gold Star families. Derby also has strong ties with McConnell Air Force Base. The City of Derby has a long history of supporting military personnel and veterans.