In the early spring of 1869, the Alexander Garrett family brought

their covered wagon to a stop on the bank of Spring Creek after a long journey from Ohio. They took out a claim and later built a sod house near the current location of Garrett Park. that is where the city known today as Derby began.

The city was formally established by Hart Minnich and John Hufbauer when they filed a plat on July 11, 1871. Hufbauer was originally from an area near El Paso, Illinois and decided the new city should bear the name El Paso.

By 1880, the railroad had pushed farther south, and the mail for El  Paso, Kansas and El Paso, Texas was constantly mixed up. To ease this problem, the railroad depot was called Derby, after a railroad official, C. F. Derby. Gradually, residents began to call the town Derby. The town of about 300 was formally incorporated on June 1, 1903. The town continued to be named El Paso until 1956 when the name was officially changed to Derby.

Until Derby became a city of  the second class around 1955, it was under the administration of a mayor and five council members who were elected at large. When redistricting became mandatory in 1957, four wards were established with two council members elected from each ward. The mayor made all appointments for city offices other than judge and council members. By 1959, the governing body appointed a city clerk who functioned as the city's highest  official on staff. The first city manager was appointed in 1981. Today, the mayor is elected at-large, and the city operates a Mayor-Council-Manager form of government.

The first city building in Derby was constructed in the 1880s. When a new building was built in 1966 on Baltimore Ave., the original structure was moved to Old Cowtown Museum in Wichita for historic preservation. In 1990, a new city hall and library building opened on east Madison Avenue at Mulberry Street. In 2001, a new city hall opened north of the library, and the old city hall was converted into a senior center. In 2009, the library moved to a new building. Its former space was remodeled to expand the senior center, create the Derby Welcome Center, and expand storage and offices for city hall.

Many schools have been built since the first school district was organized in 1872, with a bond issue of $1,500. Derby Public Schools (USD 260) is known for its award-winning teachers who help children reach their full potential. The school district is the largest employer in Derby. It serves McConnell Air Force Base, Oaklawn Improvement District, and some south parts of Wichita. A new high school opened in January 1994 on Rock Road between Madison Ave. and James St. The former high school, built in 1959, became Derby Middle School (6th-8th grades). A second middle school, Derby North, opened in 2015 on Rock Road north of 63rd Street (Patriot Avenue). Derby has nine elementary schools plus two private elementary schools.

Along with an excellent school district, the city has many recreational activities. The Derby Recreation Commission, established in 1980, serves nearly 8,000 area residents each year. Phase I of the DRC opened in 1986. Phase II, including an indoor pool, fitness center, indoor track, three racquetball courts and three basketball courts opened in 1994. In 2013, the DRC completed another renovation, adding a yoga studio and several fitness classrooms.

As Derby grows, its amenities increase as well. In November 2002, residents passed a half-cent sales tax to fund a regional aquatic park. Rock River Rapids is located at James St. and Rock Road and opened in 2004. This regional park serves 70,000 Derby residents and visitors each summer.

The Rock Road commercial corridor is growing each day. It includes a $40 million hospital that opened in 2019, a dinosaur park and various medical offices and retail businesses.

Although earlier attempts to organize a library had been made, the first official Derby Public Library was established in the Derby City building in 1957 with donated books. The Derby City Council was empowered to levy two mills to maintain the library, hire a librarian and purchase books and supplies. The library moved to its own building at Walnut and Derby Streets when land was donated to the city in 1968. Due to an increase in the number of books and population to serve, the library expanded in 1990, becoming a joint tenant with City Hall at Madison Avenue and Mulberry Road. In October 2007, Derby voters approved a half-cent sales tax to finance construction of a new library. The new state-of-the-art Derby Public Library opened in November 2009 at 1600 E. Walnut Grove. Today, the library is funded by 4.6 mills (property tax) as well as the Derby Difference Sales Tax.

In January 2011, the City opened a new facility in the space formerly occupied by the library. The Derby Welcome Center serves as the “front  door” to the community for visitors, newcomers, residents and businesses. The Derby Chamber of Commerce operates the front desk to greet those who need information, maps or brochures. The Welcome Center also showcases the city’s amenities and history. The large meeting room in the Welcome Center is named the Austin Room in honor of Sam & Phyllis Austin, long-time Derby residents. Sam Austin was very active with the Derby Volunteer Fire Department, serving as Fire Chief from 1979 to 1985.

Derby seniors originally met in the First Baptist Church in the 1970s, calling themselves the Golden Agers. Later, they gathered at the first Recreation Commission building and then used a room in the new Derby Recreation Center. When the city library moved to the facility on Mulberry Street, the seniors began using the old library building on Derby Street. When the city outgrew the office building on Mulberry, the facility was renovated to serve as the new senior center in May 2002 and expanded in 2010 after a new library was built on Walnut Grove.

The Derby Senior Center provides programs in music, health, technology, exercise, crafts, relaxation, games and more. Derby boasts one of the most modern senior facilities in the state, serving more than 3,000 seniors in the area. It became nationally accredited in 2011.

The El Paso Water Company started its service to the community in 1953 with a 100,000 gallon elevated tank. Installation of a water system did more than any other service to promote Derby to the status of a city. Automatic pump  controls and a 500,000-gallon tank were brought into service by 1958. Extra lines from pumps to storage were put in on the bridge of the Arkansas River in 1963. In 1988, two ground-level storage tanks and two pressure towers began to serve residents in Derby. In the late 1990s, Derby realized its growing population would require additional water for future growth. After requests for additional water rights were denied by the state, Derby chose to buy El Paso Water Company and purchase water from the city of Wichita. The entire city began receiving Wichita water in 2004. Today, the City of Derby maintains water distribution throughout the city and provides service to 10,000 residential and business customers.

A city-owned and operated sewage treatment plant was built in 1952 and enlarged in 1961 to serve a population of up to 10,000. In 1992, a new interceptor line was built in the Spring Creek development east of Rock Road. In 1996, the entire wastewater treatment plant was upgraded to include a biological process basin, a 90-foot clarifier, an operations building, an ultraviolet disinfection building and a bio-solids handling facility. In 1998, the southeast interceptor was installed through the Oakwood Valley and Tiara Pines developments. In 2011, the next phase of the southeast interceptor provided sewer service for development east of Rock Road and south of Madison  Avenue. 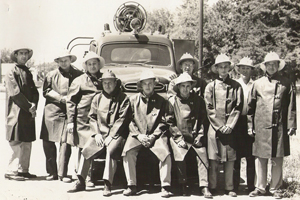 In 2004, the City took its first step towards a combination career-volunteer fire department. The Derby Volunteer Fire Department had been a volunteer department since its beginning in 1953. In 2004, Fire Chief Brad Smith was hired to mold the newly designed department. In 2005, eight full-time firefighters started working at Fire Station #82 on Rock Road near Meadowlark. The City’s other station, Fire Station #81, was located near Baltimore and Market. In 2019, Fire Station #81 was relocated to a new station constructed at Madison and Woodlawn.

Fire Station #82 opened in July 2002. It houses Sedgwick County EMS Post 11, which provides service to the city of Derby and southeast Sedgwick County. In October 2013, citizens passed the Derby Difference Sales Tax to begin in January 2015.The tax provides additional staff and equipment to the fire and rescue department as well as funding for parks and the library.

The first chief of police was hired by the City of Derby in 1955, and a Justice of the Peace was installed in 1958. Today, the police department has three divisions and employs nearly 60 people. The police and courts building on Baltimore Avenue opened in June 2002. The department is known for its community policing, including most notably its beat teams, school resource officers and other cooperative projects with Derby Public Schools. The department holds an annual Youth Citizen Police Academy in the summer and a Citizen Police Academy (Feb.- May) for those 18 years and older.